Tonight’s comic is about the scariest aspect of Star... Tonight’s comic is about the scariest aspect of Star Trek

by EditorDavid
Slashdot reader mikeebbbd noticed this in the AP's Florida hurricane coverage: Electric car maker Tesla says it has temporarily increased the battery capacity of some of its cars to help drivers escaping Hurricane Irma. The electric car maker said the battery boost was applied to Model S and X cars in the Southeast. Some drivers only buy 60 or 70 kilowatt hours of battery capacity, but a software change will give them access to 75 kilowatt hours of battery life until Saturday. Depending on the model, that could let drivers travel about 40 more miles before they would need to recharge their cars. Tesla said it made the change after a customer asked the company for help evacuating. The company said it's possible it will make similar changes in response to similar events in the future.

Ronald.phillips, Randy Belk and one other like this
05 Mar 20:22 by timothy
AmiMoJo writes: Reddit's new CEO, Steve Huffman, announced new a content policy and the banning of a small number of subreddits today. Additionally, some subreddits will be "quarantined", so users can't see their content unless they explicitly opt in. "Our most important policy over the last ten years has been to allow just about anything so long as it does not prevent others from enjoying Reddit for what it is: the best place online to have truly authentic conversations.I believe these policies strike the right balance." The names of the nixed subreddits make clear that they're not exactly neighbors exchanging pleasantries. by timothy
While urging policy reform as more important than per-person safeguards, Edward Snowden had a few pieces of advice on maintaining online privacy for attendees at Saturday's New Yorker Festival. As reported by TechCrunch, Snowden's ideas for avoiding online intrusions (delivered via video link) sound simple enough, but may not be easy for anyone who relies on Google, Facebook, or Dropbox, since those are three companies he names as ones to drop. A small slice: He also suggested that while Facebook and Google have improved their security, they remain “dangerous services” that people should avoid. (Somewhat amusingly, anyone watching the interview via Google Hangout or YouTube saw a Google logo above Snowden’s face as he said this.) His final piece of advice on this front: Don’t send unencrypted text messages, but instead use services like RedPhone and Silent Circle. Earlier in the interview, Snowden dismissed claims that increased encryption on iOS will hurt crime-fighting efforts. Even with that encryption, he said law enforcement officials can still ask for warrants that will give them complete access to a suspect’s phone, which will include the key to the encrypted data. Plus, companies like Apple, AT&T, and Verizon can be subpoenaed for their data. 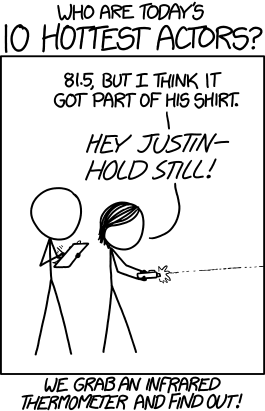 are there any dream projects you want to work on?

There are a ton of them! Now, a lot of those are creator-owned books obviously, but I’m guessing you’re asking about other types of characters.

I was able to write the Micronauts for a bit during my VENOM run, but I would love to write an ongoing with those characters.

I have a pretty great Man-Thing pitch I’d love to get the chance to write.

Other than that, there are a bunch of characters from Marvel, DC, and others… Moon Knight, Devil Dinosaur, Ghost Rider, Warlock (and the Infinity Watch), Dr. Druid, Klarion the Witch Boy, Swamp Thing, Blue Devil, Gamera… the list goes on and on, really.

There are a couple of others, too, but there are things in the works that make me leave ‘em off the list.

by Unknown Lamer
Hugh Pickens DOT Com (2995471) writes "Just in time for the April 15 IRS filing deadline comes news from the Washington Post that hundreds of thousands of taxpayers expecting refunds are instead getting letters informing them of tax debts they never knew about: often a debt incurred by their parents. The government is confiscating their checks, sometimes over debts 20—30 years old. For example, when Mary Grice was 4 (in 1960), her father died ... 'Until the kids turned 18, her mother received survivor benefits from Social Security ... Now, Social Security claims it overpaid someone in the Grice family in 1977. ... Four years after Sadie Grice died, the government is coming after her daughter. ... "It was a shock," says Grice, 58. "What incenses me is the way they went about this. They gave me no notice, they can't prove that I received any overpayment, and they use intimidation tactics, threatening to report this to the credit bureaus."' The Treasury Department has intercepted ... $75 million from debts delinquent for more than 10 years according to the department's debt management service. 'The aggressive effort to collect old debts started three years ago — the result of a single sentence tucked into the farm bill lifting the 10-year statute of limitations on old debts to Uncle Sam.'"

by Soulskill
An anonymous reader writes "When Microsoft terminated official support for Windows XP on April 8th, many organizations had taken the six years of warnings to heart and migrated to another operating system. But not the U.S. Internal Revenue Service. Only 52,000 of their 110,000 Windows-powered computers have been upgraded to Windows 7. They'll now be forced to pay Microsoft for Custom Support. How much? Using Microsoft's standard rate of $200 per PC, it'll be $11.6 million for one year. That leaves $18.4 million of their $30 million budget to finish the upgrades themselves, which works out to $317 per computer."

Russian Sledges, Luciano and one other like this
06 Apr 21:53

one shirt idea at a time. http://ift.tt/1dZQQOv one shirt idea at a time. http://ift.tt/1dZQQOv

I made a WORDS HAVE MEANINGS! shirt yesterday. Looks like... I made a WORDS HAVE MEANINGS! shirt yesterday. Thank Goodness For the NSA — A Fable

by timothy
davecb writes "Slaw was kind enough to post my fable on how to not have a problem with the NSA, Thank Goodness for the NSA, and a link to the more technical MAC paper. My challenge to the Slashdot community: what's the first big step to making this all come true?"

we’ve got five years, that’s all we’ve got A magazine I don’t have much respect for contacted my manager, and said it was doing a retrospective on the 20th anniversary of the death of River Phoenix. Would I be willing to talk to their reporter?

I declined, because I don’t trust them to be respectful and accurate, but since the request came in a few days ago, I have been thinking about River a lot.

Yesterday, I was looking though my office bookshelves, and I came across some teen magazines I have from the 80s, when I was on their covers. I think they came out of Wilhouse 13 when I cleaned up the garage, or maybe my mom gave them to me when my parents moved out of their house a few months ago.

Anyway, on the cover of a magazine from 1988, there’s a picture of River Phoenix, and it says, “Find out what River will be like in 10 years!” I kept looking at it, past the pictures of me and Sean Astin and Kirk Cameron and Alyssa Milano and the other kids who were popular with teen girls in those days, and something about that was kicking me in the stomach, making me feel sad. I couldn’t figure out why, until I did some maths and realized that River died five years later, in 1993.

We’ll never find out what he would have been like in 1998, because he didn’t make it to 1998. Just thinking about that made me incredibly sad.

I said I Twitter that I don’t think of him often, but when I do, I miss him, and hope that we would be close if her were alive today, because he was good people. I don’t know what kind of 43 year-old he would be, if we’d have anything in common, or if we would be friends. Hell, we hadn’t been close for a few years when he died, mostly because our lifestyles were incompatible and I wasn’t especially interested in his recreational activities of choice.

But he was, in his heart, a kind and loving and caring person. He loved his family more than anyone I can think of, and he did everything for them, maybe — I think — to his own detriment at times.

But he was good. River was good, and he had so much talent within him to share with the world, so many characters to play, songs to sing, and stories to tell … and we’ll never get to experience any of them. That makes me sad.

Like I said, I don’t know if we’d be close, or if we’d have anything at all in common, but when I think of him, I remember the 16 year-old who I looked up to, who taught me chords on his guitar and played video games with me while we listened to music on a tiny mid-80s boom box in Oregon.

I miss him, or at least the memory I have of him. He was good people, and he left us far too soon.